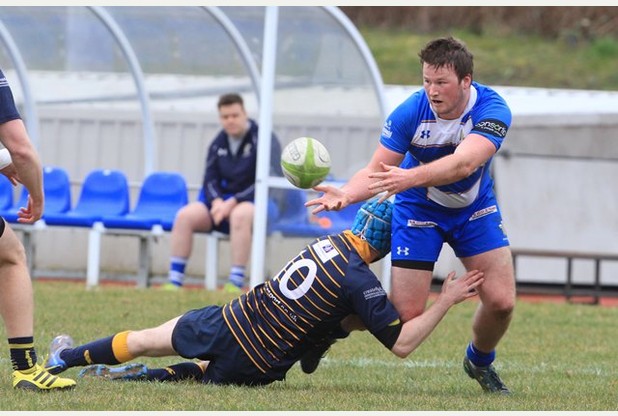 Smiths Rugby scored eight tries to continue their winning start to the season against one of the strongest packs in the league in Bedminster.

The 52-12 scoreline was achieved with smart play and swift moves- and the difference between the teams would have been greater had Smiths not conceded so many penalties. More than holding their own at scrum time, thanks to Pete Mitchell and Tom Iveson showing strongly on each side of the front row, flanker Joe Spry scooped up the ball and barged over for a try on two minutes.

The Smiths pack came to the fore to repel a series of driving lineouts and scrums on their own line. Charles Peters was tireless and showed little regard for his own personal safety in his defensive effort. Plain eventually conceded a ruck penalty and Smiths were able to clear.

Smiths’ second score came from smart interplay by forwards and backs keeping the ball alive and Chris Dickson finished out wide. Very soon after more quick hands put second row Arran Watkins on his way to the try line and he shrugged off a tackle to score for a 17-0 lead.

The one negative from the match for coaches Chris Raymond and Rob Nock was the high penalty count against Smiths and they were made to pay on 15 minutes when Plain’s pack get a driving maul moving and scored from five metres out. Smiths had the bonus point on 20 minutes as Tyler Rees strolled over out wide after a quick pick from Spry, a break by Pete Reed and smooth hands by man of the match Ben Hawker.

A cracking line from Broad Plain’s number eight saw him slice through Smiths’ defence and score under the posts to make the score 24-12 after the conversion. Smiths’ forwards do their job at a midfield lineout and a move off the training park put Andrew Hockley into space from 30 metres to go 31-12 up.

Smiths’ sixth try came when Hockley returned a loose kick and Spry glided through a disorganised defence to offload to Reed for a 38-12 scoreline.

Compared to the free-flowing first half, the second began with scrappy play from both sides and much of the action was in the middle third of the pitch. On 65 minutes Smiths clicked back into gear and Peters hit a great supporting line follwing a jinking run in the 22 from Reed to move the score onto 45-12.

Smiths hit 50 when captain Hawker broke down the right wing and passed to the flying Dickson for his second. Pritchett converted his sixth to complete the scoring 52-12.

Smiths’ next assignment will be a local derby against Cheltenham Civil Service at the Prince of Wales Stadium on October 1.