Smiths fall just short in tough Combination fixture Smiths Rugby made the short trip to Cheltenham North RFC on Wednesday evening  and narrowly missed out on a major upset in the Cheltenham & District Combination Senior Cup, losing 29-24.  Having elected to test themselves in the Senior competition, Smiths welcomed the challenge of their Gloucester Premier opposition and did themselves proud.

North started strongly with a couple of tries scored as Smiths struggled to settle into the game.  Smiths tried to bring their expansive gameplan and looked to play with ball in hand throughout.  However, when passes failed to go to hand or the ball came loose in the breakdown North were able to take advantage.

North didn’t have things all their own way however and Smiths pegged them back with a try out wide for wing Chris Mellon to make it 12-5.  Indeed it was to Smiths’ credit that North chose to take a penalty kick at goal to make it 15-5 as they knew they were in a tight contest.

were on top in the scrum in the first half and two yellow cards were shown to Smiths’ back row as they tried to repel the attacks.  10 minutes with 13 men was a big ask but only 7 points were scored by North during that time taking the half time score to 22-5 to the North.

A mistake straight from kick off led to North scoring again and left Smiths with a 29-5 deficit.  Playing against a team two leagues above them, Smiths may have been excused for letting such a task affect their play.  It was Smiths however who kicked into life and after North had a centre yellow carded, tries for winger Jacob Lake and Ben Hawker playing 12, brought them into the game at 29-17.

The last quarter saw North self destruct with scrummage and lineout starting to fail and players losing their heads.  Smiths were able to have a period of pressure 10m from North’s line with the referee team wrongly disallowing a try from their efforts.

A scuffle ten minutes from time had 2 more Smiths players and 1 from North yellow carded.  Maintaining their wide play, Smiths found their way into North’s 22m.  Two dangerous tackles saw two more North players sent to the sin bin so it was 13 vs 12 for the final passages of play.  Smiths used the extra space well and fullback Ben Spry scored on the right.  Fly half Tom Wardell added to his kicking tally to draw the game to a close at 29-24.

Although disappointed with a loss, Smiths were definitely pleased with a stirring performance, their own mistakes rather than good North rugby being the deciding factor.  To put their higher ranked opposition under real pressure and dominate the second half should give them a boost into their last three Gloucester 2 league matches. 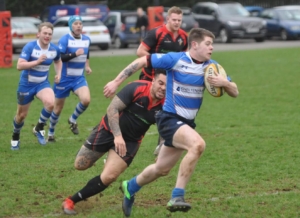 Jacob Lake on his way to the try line.

7,194 thoughts on “No disgrace for Smiths Rugby in the Senior Cup Combination”