Following on from the success of last year, we would like to invite all ex-players and supporters to the inaugural 2017-2018 season, Smiths Rugby 1952 Club gathering.

This will be on Saturday the 16th September at the Prince of Wales club, Cheltenham to coincide with the first Home league game against Cotham Park.

The usual guesser will be in operation as well as the 1952 player of the match award(s).

Dust off your old club ties and brush up on the lyrics to classic songs like “The Engineer’s Song” made famous by Bob Ellis, “The ring-a-rang-a-roo” made famous by Archie Clapham, “Old Riley’s Daughter” ruined by Cliffy Bere and many many more ….. 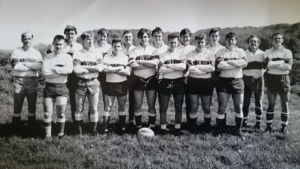 hrs and we’ll be making a draw for one lucky member to enjoy free beer at 14:30hrs with other fun and games planned during and after the match. Other prize draws to take place later in the season.

We also hope to be able to give new members their polo shirts on the day but colour and size choice might be a bit limited so we advise you get there early – issued on a first come, first served basis.

Looking forwards to catching up with everyone over a beer or three – eight by eight club open to new members!